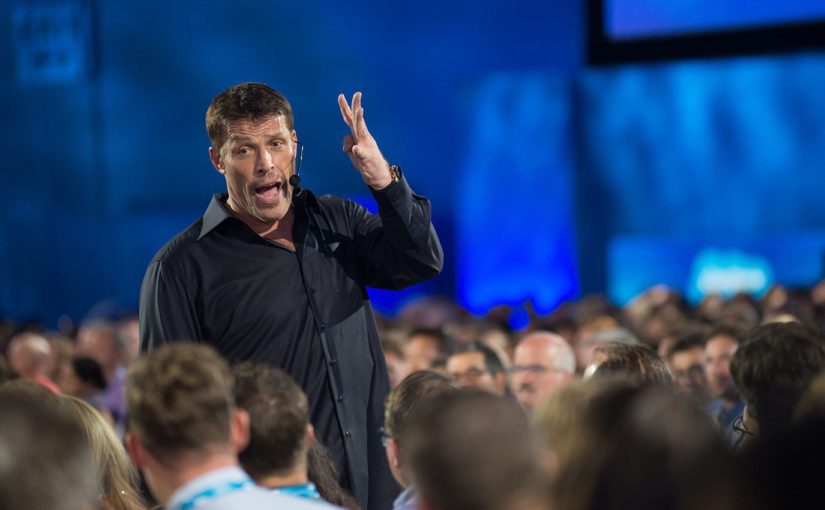 Tony Robbins is a key figure of the current motivational speakers’ scene. People all over the world attend his seminars because they know it will change their lives, just like it already did for so many people.

If you need to refresh your memory on who Tony Robbins is, go here .

Attention and recognition were not always Tony’s best friends. At the age of 17, after graduating from the high school, he left his home and started working as a janitor until he met a person who became his mentor and changes his entire life. It was Jim Rohn, entrepreneur and a motivational speaker. Tony, who barely went by on his small wage, got really inspired and started his career promoting Rohn’s seminars.

Rohn had a similar story. Once, he attended a seminar of John Earl Shoaff that changed the way he was living and working. He decided to join Shoaff’s team and, under his mentorship, he was working at the company Nutri-bio and built one of the largest organizations within it, until the company went out of business. This is something that puts entrepreneurs one step above other people. They bounce right back and start over even if they lose everything. Rohn started sharing a story of his personal development, attending events as a guest speaker and later creating his own seminars. He continued doing so for 40 years. Among his mentees were Mark R. Hughes (the founder of Herbalife International) and Jack Canfield (Chicken Soup book series).

These are a few of Jim Rohn’s famous quotes with the advice you can implement right now.

A few years later, Robbins meets a Neurolinguistic Programming (NLP) co-founder John Grinder. He was one of the specialists responsible for creating a communication approach that combines one’s neurological processes and behavioral patterns that can be changed according to specific goals. NLP was a reason Tony learned to firewalk – one of the all-time favorite moments at his seminars – as well as to overcome some of his phobias.

Throughout his lifetime, Robbins worked with different people who influenced him one way or another. Among many, there are Peter Guber (сhairman of Mandalay Pictures), Paul Tudor Jones (founder of Tudor Investment Corporation) and Marc Benioff (founder of SalesForce.com)

Robbins’ career is a great example of dedication and hard work. It also shows the importance of creating your circle of successful people. Of people to look up to, who have achieved something you want to achieve. Of people who will help you become a better version of yourself. It doesn’t have to be real people, per se. It can be self-development books (Jim Rohn says you should read at least 30 min a day), podcasts or seminars.

Tony Robbins’ new life started by attending a seminar. Yours can too. Luckily Tony hosts his seminars quite often in different parts of the world and anyone can attend.

How Much Does It Cost To Get Tony Robbins To Speak?